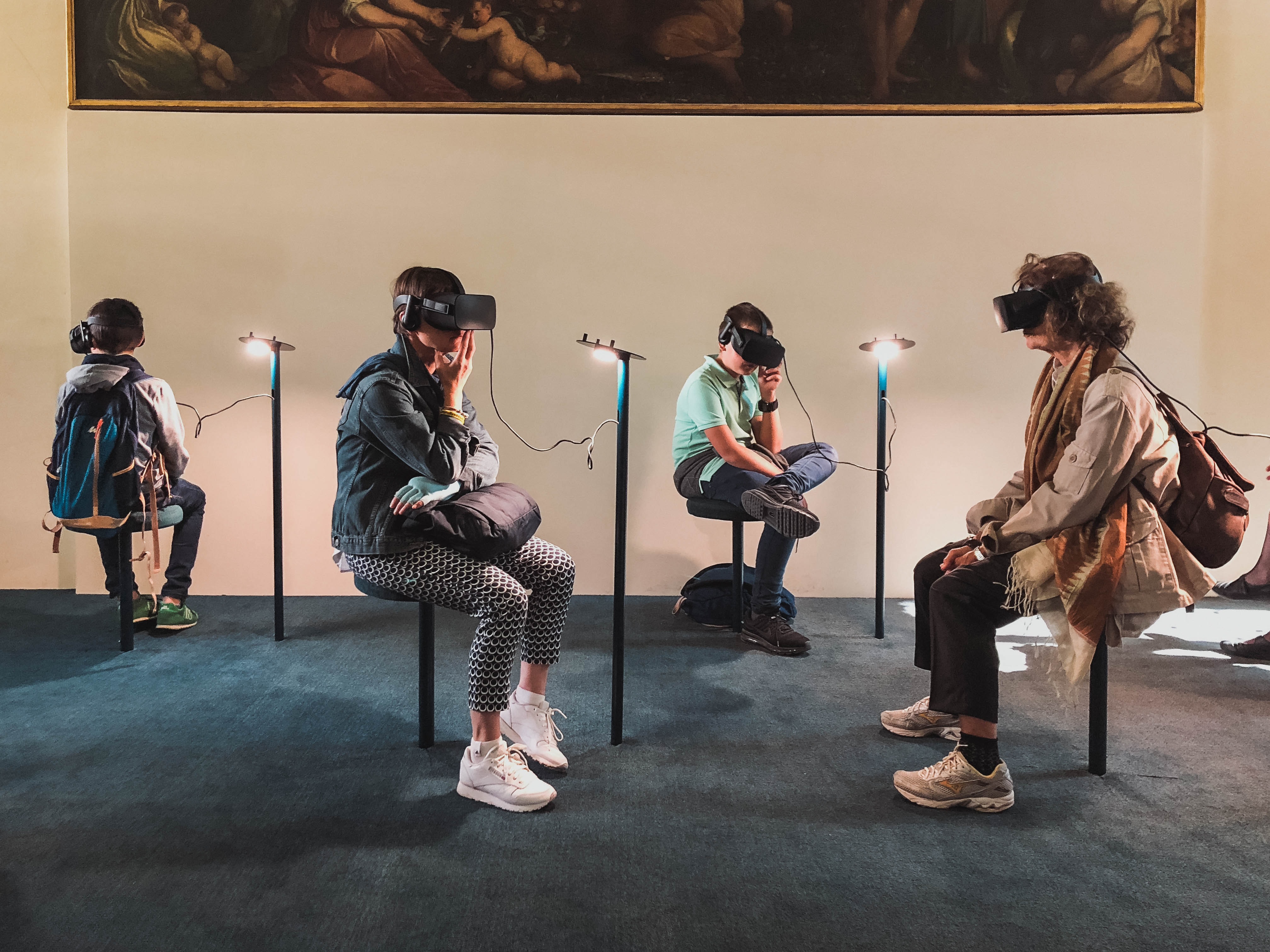 The future of education: how to prepare students for a world that doesn't exist yet?

Already 19th-century futurists assumed that a hundred year later, education will have to deal with technology - and here we are with computers, online teaching, and the promise of AI. How will we go forward? The question is especially exciting when we take into account the light-speed with which our environment changes and the predictions of how much it is going to change in the coming years.

Around the turn of the 20th century, French artists created a nowadays widely cited print series about how our world in the year 2000 would look like. Flying firemen, divers on seehorse-back, and pupils whose heads are filled with knowledge through wires. The teacher stuffs textbooks, for example L’Histoire de France, into a machine, which transforms knowledge into electrical impulses and delivers them into the heads of students.

The actual scene is far from reality, but the implication that technology becomes a radical part of education cannot be more relevant today, especially in the post-COVID era. On the other hand, ‘Zoom fatigue’ and the mixed experiences of quarantine online education point towards a renaissance of offline and in-person learning. How will we go forward? The question is especially exciting when we take into account the light-speed with which our environment changes and the predictions of how much it is going to change in the coming years.

In 1913, Thomas Edison famously predicted that "books will soon be obsolete in schools" - but not because books were to be ground up by a knowledge mill. Rather, Edison believed that one of the technological inventions he was involved with and invested in - the motion picture - would displace both textbooks and teachers alike. That hasn't happened yet. And another visionary prediction written down in Popular Science in 1961 that by 1965, half of all students will use teaching machines, also hasn’t materialized yet. The question is, will it ever become reality? Could we imagine a scenario where machines would truly take over the role of human teachers?

If we imagine students as depicted by the French drawing - little passive recipients of revealed truths, and the teachers in the roles of deliverers of those truths, then ‘teaching machines’ would have already taken over education from human counterparts. But that’s not what we keep seeing. It’s true that artificial intelligence, robotics, and other advanced technologies keep turning up in educational environments, and in 2017, Anthony Seldon, a British education expert, made the bold claim that in 10 years, robots will replace teachers. Moreover, the pandemic rapidly accelerated digital education and online learning, so tech-optimists could believe that the moment for AI teachers has arrived.

However, a lot of other experts say not so fast. In March 2021, The Washington Post wrote that based on historical evidence as well as the experience of the pandemic, technology can only be a tool for teachers and students, it cannot replace the role of a trained, engaged human teacher. As parents have come to appreciate during the pandemic, in person teaching inspires students far more than Zoom school ever will. In person, teachers can connect and engage with students that screens cannot simply replicate.

Attention spans get shorter while the world gets more complex

And while screens proved to be semester-savers during the quarantine, one of their dire consequences and that of the prevalence of exciting, colorful and ever-changing content is the shortening attention spans among students. That’s a recent trend for educators of the future to consider. A study conducted by Microsoft looked at the attention spans overall between 2000, which was the dawn of the mobile revolution, and 2015. They found that attention spans decreased by an incredible 4 seconds - from 12 seconds to 8. That’s not much better than the attention span of goldfish.

This drop has largely been blamed on the nature of technology and the constant stimulation it offers viewers. Just think about the addictive features, such as notifications, on Facebook or Instagram, which promise ever newer entertainment within seconds of time by just pushing buttons. Education cannot compete with that - but it has to cope with it. Some researchers in the last few years said that the way students are learning and how their brains work is changing due to technologies, and that’s likely to stay with us in the future.

Sherry Turkle in a video about technology and empathy says that our world becomes more and more complex while students require less and less complex readings in her class, and have less and less attention spans due to technology. What could future educators do here? Peter Rado, Research Affiliate at CEU Democracy Institute specialized in education policy believes that the issue at hand is extremely relevant. “There are various educational experiments in the field of cognitive neuroscience for developing programs for pupils of small age (in kindergartens and the first years of primary education) aiming at improving the attention span, for example the ATOLE program by Jean-Philippe Lachaux, but the problem very much exists, and a lot of research and development is needed to deal with it,” he explained. And how would adults of the future understand and remember things if they don’t have the capacity to even listen to it?

How to prosper in a world where no one knows what the next hit job will be? Perhaps, robot trainer or algorithm ethicist?

At the same time listening, understanding, moreover critical thinking and the ability to empathize will become more and more significant in the future. According to the Future of Jobs report, some of the most important skills in the workplace include critical thinking, problem-solving, people management, and creativity. Especially in a world where no one can be sure what the next hit job will be - 15 years ago no one would have believed that data scientist will become one of the highest paying jobs -, employers want to see emerging professionals who understand how to make hard decisions and showcase their leadership abilities.

So, it seems that while the imminent 4th Industrial Revolution employs more and more machines that are tasked to take over monotonous, routine work from humans, there is an increasing need for soft skills that can only be performed by humans - for the time being. Soft skills, such as communication, empathy, leadership skills or the ability to work responsibly alone or in a team. Krisztina Darázs-Sebők, Co-Founder of UniMatch, which provides customized online solutions, connecting universities with interested students through their unique university comparison site and beyond, believes that student success very much depends on professional hard and soft skills as well as practical experience combined with an applicable degree.

“I heard from a corporate professional once that the real skill is to be a generalist in a professionals’ world. To me it means adaptability and cognitive flexibility as basic skills. To this I would add creative and innovative mindset, resiliency and digital literacy as skills that need to be built through the educational journey and demonstrated at the start of the professional career,” she explained.

How not to lose human traits like empathy surrounded by machines?

On the other hand, these soft skills are very difficult to master via online learning and through the usage of screens. How could educators resolve this tension? Peter Rado believes that “as far as social skills are concerned they are much more easily improved in a diverse offline learning environment. Therefore, teaching and learning are better to remain blended, that is, combining online and offline learning experiences.”

He thinks that other skills, such as problem solving and creativity are very effectively developed by various online activities, but it is important to keep in mind that most problems to be dealt with are already emerging online or can be solved through online communication. “The point is that the approach of having separate lives online and offline should be abandoned, schools need to integrate online spaces into their teaching strategies instead of the hopeless effort to keep it outside of walls,” Rado concluded.

What all these skills prepare for is not just learning in school settings, but the capacity and openness to learning throughout life. Last year, when the pandemic hit, dance teachers, event organizers, and many more representatives of offline jobs had to reskill themselves and start something new. People who never had any experience in the delivery industry, changed their business model and tried to succeed in brand-new areas of life.

When experts say that the 4th Industrial Revolution may impact an incredible 50 percent of jobs, the COVID-experience not only seems necessary but also as an exercise for other huge changes on the horizon. Professionals who want to remain competitive in their environment will need to constantly re-skill themselves - and that’s why it is of tremendous importance to teach the next generation to cope with anything to come.

“My idea was to create a system, which helps education be more equal but also includes motivational elements both for students and teachers”

The future of education: how to prepare students for a world that doesn't exist yet?