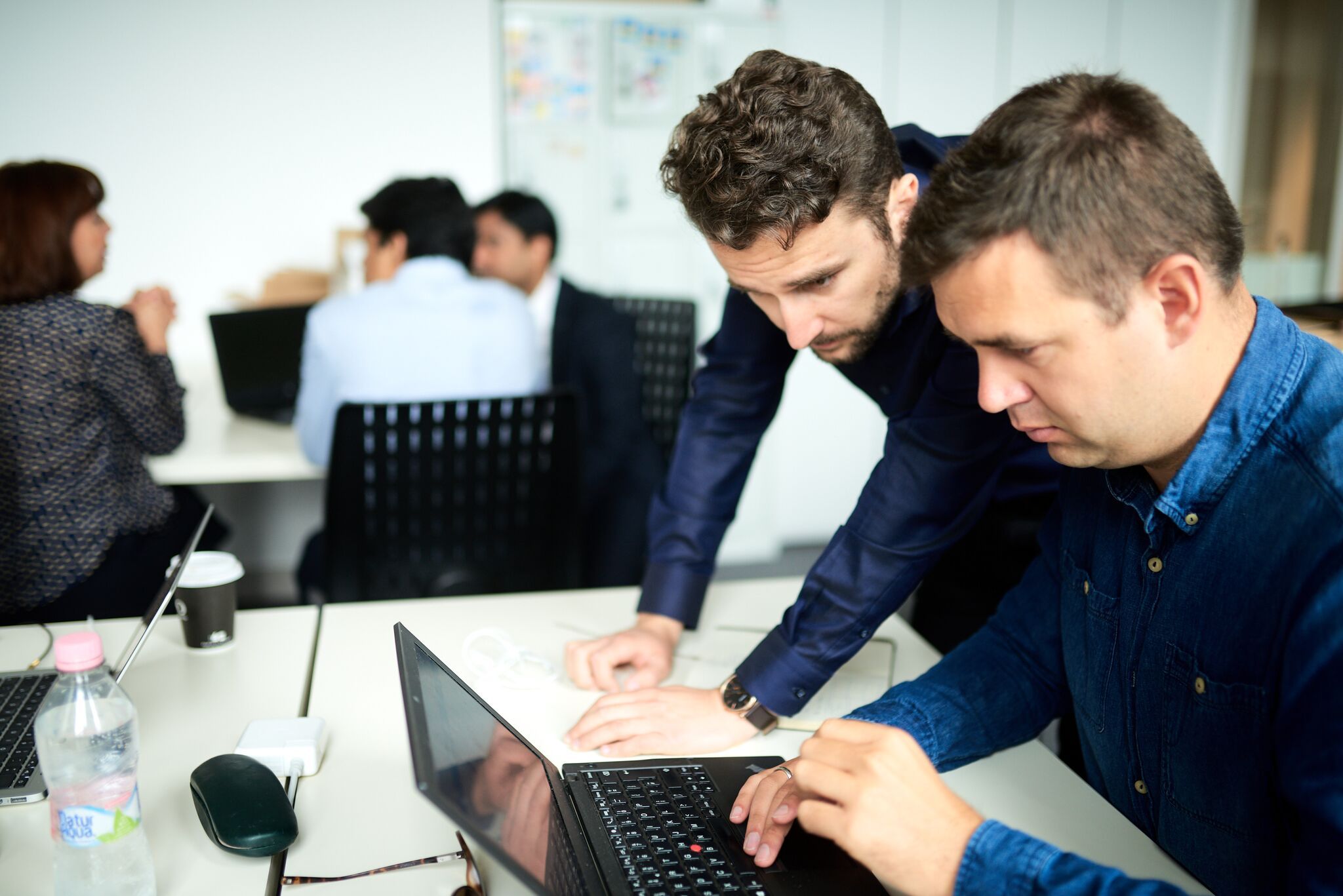 One of the most successful CEU iLab Teams, BrokerChooser, lets users compare online brokers no matter whether they operate as single local traders or as large international platforms. They compare brokers along more than 50 dimensions, and their articles online trading provide direction in an industry where finding your way among jargons and lingos is a challenging even for professionals. Founded in 2016, they have been part of the CEU iLab ecosystem for the last 6 years, giving back what they received in the form of mentoring and opportunities for work. Here, Tibor Bedő, co-founder and CEO, and Gergely Korpos, co-founder and Chief Product Officer, talk about the very start, how they have been managing constantly changing challenges, tough situations and what CEU iLab means for them.

‍Can you tell me how BrokerChooser started?

Tibor: So when we started BrokerChooser in 2016, we were doing it from a Starbucks. Really, really cliché, but it did happen next to the Mammut shopping center in Budapest. We were working there and I saw an online article about CEU iLab. Afterwards, I practically sent a cold email like “Hi, this is us” alongside the one-pager saying we would really like to join CEU iLab, could we meet? And then Andrea Kozma responded really quickly with sure, let's meet. So I went into CEU and we talked about BrokerChooser. Then Andrea guided me around the place: she had an office, it was practically a room, and next to it was another room where the team of Talk-A-Bot was sitting, and the team of Absorice was also around. That was it. That’s how we started. And we became the first team who had absolutely no affiliation with CEU thanks to Andrea seeing something in us.

And how did the team grow into the company that you lead today?

Tibor: Well, it wasn't a smooth ride. Let's put it this way. I think it was pretty clear from the start that for us it makes sense to work with juniors, with interns. So from the start, we had an intern. After that the direction of team extension was driven by what kind of knowledge was needed for Brokerchooser and was hindered by the fact that we couldn't pay people. We would desperately need a marketing person obviously, we would desperately need a software developer who could develop the page, we would need a designer, etc. but we haven't had the money for a very, very long time. So, we needed to do every kind of thing by ourselves, except technology development. We never did that but we did everything else from design to HR, from finance to analysis, practically everything.

And I think we really hired aggressively from the start. So I think the product hasn't been that much proven when we already invested in talent. And I think we did an amazing job in recruting really smart people from the start, and we did the hard thing to say goodbye to multiple team members. We managed to build a good team, which I think is one of the hardest part.

What was the source of talent?

Tibor: CEU definitely was a great help. We participated massively in the Capstone Consulting Project. I think in the record year, it was definitely 9-10 people who did their project with us. And I'm going to say that happily, meaning that their project was meaningful for us, was interesting for them and also had an academic aspect. I think it was a really, really good fit. But we also had good discussions with CEU iLab people about how to recruit people. So people working from CEU iLab dedicated some time to have a meeting with us and then told us what kind of recruitment channels are there in the world. These were all valuable pieces of advice.

How did the challenges you faced shifted throughout the years?

Tibor: At the start, when you're building, it's very personal. There are only a handful of people and they practically dedicate their entire time to it. And here, emotional health is important because at the start, you're getting hits and kicks from the outside world. It's inevitable. And in this case, listening to words of encouragement in CEU iLab instead of pieces of advice like you should do this or that, counts a lot. Or for example, it is also a motivation that you see other CEU iLab teams struggling because then it's not you who are messing everything up, but it's a completely normal phenomenon when you’re a startup.

And when you get bigger, there's the border when it comes to 15 people. So until 15 people, I or Greg could manage on a roll. You can still see who does what, it's practically one team. When you grow beyond 15 people, then it becomes multiple teams with 3-4 persons. And when it comes to roughly 50, I think that's also somewhere where I as a leader am losing the personal connection with some of the team members. I still know everyone really well, but it’s not that day-to-day work relationship anymore.

Was there a point where you had the feeling that “okay, we made it”, or now we’ll survive?

Tibor: Well, I think I myself and probably everyone at BrokerChooser, I'm not super good in celebrating successes. I'm not sure why, but we're always aiming for the next step. But there were definitely milestones, and we were really happy about those. The first one was, I would say, when the first eurocent came in. So I remember we got the first check from a financial institution with 80 euro, and we were insanely happy about it. This was definitely a huge success. The second one was when we closed our first month profitably because it's nice to earn something and not just burn your money or your family's money.

Another nice one was when our name started to be out there. We had really small hints that it's happening. For example, two years ago we got an email with six words in it. It was, “as promised, saved tons of hours”. And I think this was a really good moment because we had feedback that we’re creating customer value. Another one was when our Head of Marketing, Dan Sallai, moved to Barcelona a few months ago, and went to an investment trading meetup in Barcelona. Afterwards, he just wrote us on Slack that guys, I talked to 5 people and 3 of them heard about BrokerChooser. These are the kind of things which give you an indication that you're on the right track.

What are you up to right now? What is the next milestone to be reached?

Tibor: The next milestone also comes together with the Zeitgeist. Right now, interest rates are rising, inflation is superhigh and that will definitely impact the retail investment space. And in this environment, to paraphrase Churchill, we would not want to waste a good crisis. So, we’d like to expand our page visitors’ number. I think we are really well positioned to do it: we are bootstrapped and profitable. And we're counting also on being better than our competitors and that some of the sectors will be hit harder than the investment space, and we hope to get some good talent from these other sectors, such as moonshot industries like quantum computing.

Was there any point in your startup journey when you had the feeling it’s time to give up?

Tibor: Of course, multiple times. It’s really really tough to build a digital product where the reward comes later. And the amount of energy is tremendous that you need to put in. If you don’t think about it that you should probably quit because I don’t think you still have your objectivity. You need to think about it sometimes.

And have you figured out the best technique for you to release stress when things get very tough?

Tibor: I think a good business partner really helps. There are multiple occasions when Greg gets stressed and I tell him that yes, that’s the situation but look on the rosier side, and there are many occasions with the other way around. It’s just good to hear the other side how he sees a situation differently. Or the other way around: it can also be comforting to know that the other person is stressed. That can also help. If I say that I’m really worried about a particular area of the business and Greg says that me too, I’m already feeling better.

Can you tell me what iLab means to you?

Tibor: When I misquote it and change it to hard to define what quality is but I know it when I see it, this is what I felt about CEU iLab. The people, the network, the other teams, everyone was representing high quality on an international level. This counts a lot. And I’m terribly sad to see it being dismantled. I’m convinced it’s going to come back because the best universities are doing it. Since CEU is one of the best universities, they will do incubation. Innovation and education comes hand in hand, and I think this will continue maybe 5 or 10 years later, maybe 5 months later, I don’t know but it will happen.

Greg: Yes, Andrea (note: Andrea Kozma, director of CEU iLab) was always very flexible and open for new ideas and initiatives. That’s basically how we entered iLab as an outsider without having any relations to CEU. She said that we're going to change the rules here so that you and anyone from outside CEU can join the iLab. I think that was very cool. And the second one was that when we needed help, like instant help, we could always reach out to iLab and Andrea. It was awesome how she always tried to help us with all kinds of resources that she had.

And the third one is that I would be really glad if the iLab would continue in a transformed form or if the iLab story would not end here, because I think this was a very cool community where we could interact with the university but also have this incubator program inside, it was an awesome setup. So very cool years, positive vibes and good memories. That’s what we bring with ourselves from CEU iLab.

What Does Conquering New Heights in Mobile Streaming Really Take in 2022? Here’s the Story of RECnGO

Team Stories: Unique Recipes on How To Create Success From Nothing